You are here: Home › Who we are › Environmental Policy › Photovoltaic and solar

A photovoltaic system is essentially constituted by a set of components capable of converting the light radiation into usable electrical energy for domestic and industrial use.
The system installed at the Cluentum has a power of 9.80 kW three-phase, obtained by means of 56 panels 175W monocrystalline silicon. The panels are to realize the coverage of a shed for parking which occupies a floor area of about 70 square meters, special attention was paid to the choice of materials, in fact, the main structure is made of fir wood to retrieve materials and sections other building components present in agritourism complex.
The location was chosen in order to obtain the best orientation to the south-southeast and at the same time make the panels barely visible from any point, only the rooms on the upper floor you can see these. The lower part at the time was allowed to view essentially educational purposes as the accessibility of the system makes it easy destination for visitors and particularly school children; provided is complete masking of the electrical connections and the metal structure. This is a temporary arrangement as all the photovoltaic panels, along with other planned solar thermal, will be integrated into coverage of the restructuring of the old accessory farm / barn for catering farm.

The operation of the system is recorded and monitored through the digital displays present on the inverters communicating all the data of operation: the power produced at the time, the energy produced during the day and the total from the date of activation, the output voltage from the panels , as well as all operating parameters available to the technicians.

Obviously there are all the necessary electrical safety devices in accordance with the dictates of the Italian Electrotechnical Committee (CEI 11-20), to ensure the safety of all operators in the sector, we must not forget that it has to do with a real central production of electrical energy, albeit of limited power, connected directly to the electrical lines of distribution must therefore ensure that the same safety of central much larger. And ‘maybe this was the technical challenge, but above all cultural in recent years, which has enabled the implementation of strict regulations to ensure proper functionality and safety of PV systems and has in fact made unnecessary storage batteries, which once formed the great contradiction of these environmental achievements.
In environmental terms, it is considered that the annual production of electricity, estimated at 12,740 kWh and that covers 90% of the consumption of the accommodation, allow a reduction in CO2 emissions of 9.7 tons / year of NOx of 21 , 6 kg / year. The plant in question is one of the first achievements made possible by the mechanism of the so-called feed-in tariffs Conto Energia (MAP Decree 28.7.2005 – question n.2127), through which the electricity produced is fed into the grid and sold to the Manager at a price about three times higher than that of purchase, for a period of 20 years.
The work began in June 2006 and were completed in December with the timing of routes dictated more bureaucratic than by the actual time frame, the actual construction has in fact about two weeks of work. The electrical connection of the local SAMS took place February 16, 2007, the second anniversary of the Protocol Kjoto, and the plant is now operating regularly and produces electricity.

The construction was designed by engineer Charles Bianchini of Tolentino and the realization made ​​by the TEA-Energy Technologies Alternative well Tolentino, established a few years putting together different professional local and capable of operating at 360 ° in the field of design and construction systems for energy saving intended for widespread application in small companies in the area.
The photovoltaic system is in fact only the first operation carried out at the Cluentum, are planning a solar thermal plant for the production of hot water and pool heating, and a geothermal system for heating the new premises. Geothermal probes have been already partially laid during the construction of the excavation work and in part will be completed during subsequent phases edificatoria, in particular, you will recover the heat accumulated by the pool in the summer to be able to exploit in the first phase of the cold season . The set of photovoltaic panels, solar thermal and geothermal will be able to make it almost self-sufficient in terms of energy the whole structure, the electricity produced will run the geothermal heat pump with which you are going to heat up the new local. 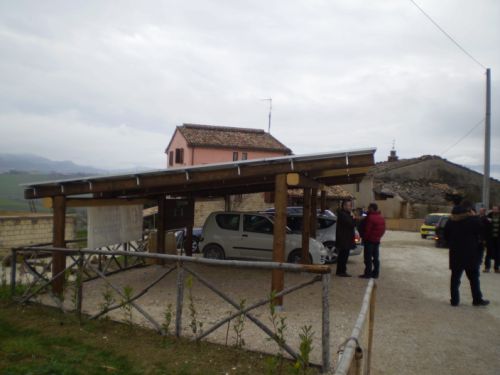